Get “The Christmas Department,” and handmade gifts, when you join the book’s Kickstarter Campaign 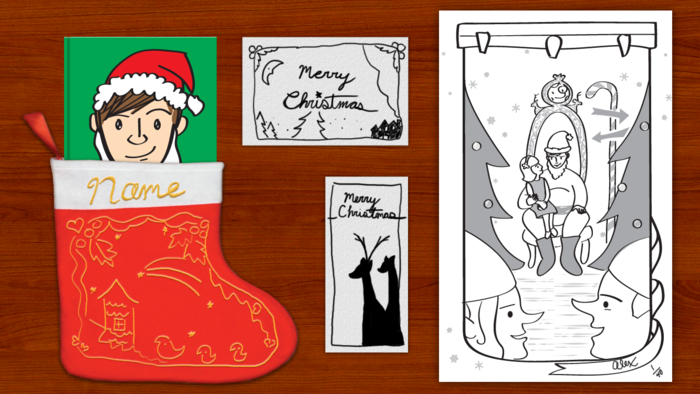 “The Christmas Department” by Alex Schattner

The week before Thanksgiving…Mr. Austin, a high school art teacher, was told that his funding was being cut in half due to budget cuts. The athletics department wasn’t being cut, just the arts. “Why?” Mr. Austin asked. “Because sports build … END_OF_DOCUMENT_TOKEN_TO_BE_REPLACED

Two roommates shared a small apartment in the heart of New York City. One roommate was a writer while the other was a model. Most of the time they got along fine, but one particular Wednesday evening, the model returned … END_OF_DOCUMENT_TOKEN_TO_BE_REPLACED

One day, a dog and a cat were chasing after the same mouse, both used their instinctive skills.  The cat ran as fast as it could, but the dog reached the mouse first. “Okay, you win,” said the cat, “You’re … END_OF_DOCUMENT_TOKEN_TO_BE_REPLACED

A wealthy business mogul, who dealt in dark magic, had an ingenious idea to sell products faster. He cursed an entire generation of Americans with fifteen minute attention spans. This made true love and true friendship nearly impossible, for both … END_OF_DOCUMENT_TOKEN_TO_BE_REPLACED

Two best friends were trying to come up with a business plan together, but each had a very strong opinion. One wanted to open up a doughnut shop and the other an ice cream shop. Creating both would be too … END_OF_DOCUMENT_TOKEN_TO_BE_REPLACED

Jackie thought her advice was as good as gold. For this reason, she would bestow her advice whether or not it was desired. When her oldest friend mentioned being unhappy, Jackie told her to eat more dessert. When her second oldest friend broke up with her boyfriend, Jackie was pleased.

“He was always wrong for you,” jackie said, “You need a guy who can take care of you financially, because you can’t really make money as an artist.” her friend was shocked to hear this, because she thought her art career was progressing.

Jackie’s boyfriend was aware of Jackie’s judgmental side, but he looked at it from a positive angle. He loved that she cared enough about her friends to listen to their problems. What he wasn’t expecting, was that her high standards would keep her from saying “yes” to his marriage proposal. One night, while they were watching a “life’s too short” movie, he popped the question.

“Let’s get married,” he said, “I love you. You love me. We should spend the rest of our lives together.” jackie was not pleased.

“You’re asking me on our couch,” she said, “This is not romantic. Ask me someplace nicer, and I will consider it.”

Jackie went back to her apartment, and had a very vivid dream that night. She saw her oldest friend sitting at an ice cream counter. She looked almost unrecognizable; hidden under layers of fat. Jackie tapped her on the shoulder, and looked her in the eye.

“His money owns me now,” her friend said, and the scene faded behind marinara sauce. Jackie was transported to summer’s field. Her boyfriend was down on one knee, holding a box in his hand.

“Jackie, will you eat a hamburger with me?” he asked, and he opened the box to reveal an all-beef patty on a sesame seed bun.

“Everything looks perfect,” her boyfriend said, looking around, “This is what you wanted, isn’t it?”

“No. It’s the words that are important,” Jackie said.

“But you didn’t think so before,” he said, shoving the hamburger in her mouth. Jackie awoke instantly. She threw on robe, and rushed over to her boyfriend’s house where she shouted, “yes,” and vowed never to let go of him again. From there, she called her friends to tell them the good news, and took back all of her advice. Never again would Jackie give advice without first thinking about the consequences.

When a Betta fish is born, he and his brothers and sisters are split up from their mother so as to avoid being eaten. From the beginning, each Betta learns to fight for their lives. Once the babies are left … END_OF_DOCUMENT_TOKEN_TO_BE_REPLACED

Abby and Daniella’s status as “best friends” was challenged their junior year of high school when they both fell for the same guy. His name was Breckin Harts, and he was handsome, strong, funny, and new in town. Abby met … END_OF_DOCUMENT_TOKEN_TO_BE_REPLACED