Two best friends were trying to come up with a business plan together, but each had a very strong opinion. One wanted to open up a doughnut shop and the other an ice cream shop. Creating both would be too time consuming, but neither would budge.

“This is stupid!” the “Ice Cream” Friend shouted, “Everybody likes ice cream?” 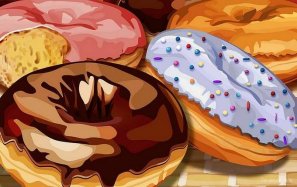 “There’s more to it than that,” said the “Doughnut” Friend, “Last night, I dreamt of a land covered in powdered sugar. It tasted like happiness, and smelled of vanilla. Then the ground gave in, and I fell and fell until I landed on a soft sweet cushion of buttery goodness. A winged baby flew to my side, and whispered ‘Doughnut’ in my ear.”

“Well, I had a dream, too,” said the “Ice Cream” Friend. “I stood on a mountain made of cool cream, and dove off into an ocean of chocolate syrup. I would have drowned drown if it wasn’t for a Maraschino Dolphin. He brought me safely to shore and said, ‘You must make ice cream, or I will eat myself.”

“I guess we’re at a standstill then,” said the “Doughnut” Friend.

“I guess so,” said the “Ice Cream” Friend, and they both went their separate ways. Over the next few years they each built up the most delicious “Doughnut” and “Ice Cream” brands the world had ever known. They crossed paths several times at Food Conventions, but never spoke. More years passed, and they both got married and had kids. Still, they never spoke.

It was a news anchor who eventually brought them back together, when she did a report on “The People of Sweets.” She asked both the friends what made their signature products so special.

“Why didn’t you tell me you couldn’t eat dairy?” said the “Ice Cream” Friend, shocked. “Did you just make up that whole crazy dream?”

“That’s okay,” the “Ice Cream” Friend said, “I wasn’t entirely honest with you, either. I created a signature waffle cone, because I’m gluten free.” The two rose to their feet, and hugged and cried. They mourned all the time they had lost due to pride.

After the interview, the friends went out for lunch. There, the “Doughnut” Friend inquired as to whether the “Ice Cream Dream” had been made up.

“I don’t remember,” said the “Ice Cream” Friend, “but if that maraschino dolphin is out there somewhere, I hope he’s proud of himself.”

One thought on “Sweet Friends”