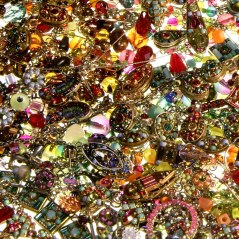 Eva would buy anything as long as someone famous owned it. When she flipped through magazines, she wanted every product on every page. She wanted a blue handbag to match her blue dress, and an emerald green coat to match her shoes, and yellow shoes to match her belt. Her favorite items were cut out of the magazines and pasted into her scrapbook.

Every night, Eva went to bed wishing she could afford everything she wanted. One morning she awoke and took a shower. After washing her hair, she realized she was out of conditioner.

“I wish I had more conditioner,” she said, and instantly there was more conditioner. Eva was impressed, but not all that surprised. This should provide a hint as to how spoiled she was.

“I wish this water came from Lulianna Lake,” she said. According to her favorite gossip site, this was the only kind of water in which A-listers bathed. Instantly, the water changed its consistency and temperature. The water was freezing.

“No. I want the water hot,” Eva said, and the water went hot…really hot. IN panic, she leapt out of the shower and shut the water off.

“It hurts so bad,” she yelled, “I never want to take a shower again!” The words escaped her lips before she could pull them back. When she tried turning the shower on again, it didn’t work. She would have cried if it wasn’t for her glittering scrapbook.

“Oooh!” she said excitedly, “I wish I had everything in my scrapbook!” Again, Eva got what she wished for, only not in the way that she planned. Jewelry came crashing down from through her ceiling, covering her in gold, silver, and dust. Then a much larger object crashed through her ceiling, a gold-plated car. Eva tried to get out of the way but she couldn’t move her right foot fast enough, and it got trapped under one the tires. Eva cried out in pain.

“I wish I was out of this mess,” said Eva. She squeezed her eyes shut, and when she opened them again, she was standing on a busy sidewalk in nothing but a dirty towel, and jewels. She tried to walk, but she was afraid her ankle might fracture further. She stared at herself in a storefront window.

“I look like a homeless, kleptomaniac,” she said, “If only I could go back, and appreciate what I had,” and for the last time, Eva’s wish was granted. However, her life was not entirely the same as before. She now spent less time being jealous of what other people had, and more time embracing opportunities, and being thankful for her good health.

2 thoughts on “All For Eva”