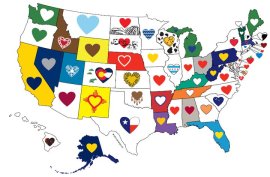 Nina took a trip to a nature preserve, hoping to be alone with her thoughts. She had just broken up with her fifth boyfriend in three months, and was feeling disgusted with herself. So disgusted, in fact, that she didn’t mind coming across a grizzly bear. She simply stood still and closed her eyes.  Then…the bear spoke.

“Fear not,” the bear said, “I will take you to your one true love.” So, feeling curious, and a little suicidal, Nina listened. She jumped aboard the bears back and soon they were bounding through the forest.

At that same moment, on the opposite side of the country, a man named Brad was awoken by an enormous eagle outside his window. Brad had also recently ended a relationship, but for a different reason. He and his girlfriend were going to move in with one another, but they couldn’t decide whose apartment to keep. A seemingly small issue, became a power struggle that tore them apart. Like, the bear, the bird spoke to him.

“Rise up,” said the eagle, “I will take you to your one true love.” So, Brad climbed out of his window, and on to the eagles back. Before long, his apartment was lost under the clouds.

Nina and the bear had been traveling for hours, when they came upon a family eating around a campfire.

“Might I join you,” Nina asked, while the bear hid in the bushes.

“I’m sorry,” they said, “but there isn’t enough to go around.” Nina looked at their plates. They seemed to have more than enough food, but Nina wasn’t going to argue with them. As she was about to leave, a wind blew, and the fire’s flames shifted, setting the father’s shirt on fire. Nina acted quickly. She removed her coat and threw it over the father’s arm, extinguishing the fire. The father was unharmed, and very grateful.

“Perhaps we have more food than I realized,” the father said. He invited Nina to sit down and partake in their fine meal. By nightfall, Nina was treated like a member of the family.

Brad and the Eagle also rested that night. The bird set him down in front of  “Turner’s Bed and Breakfast,” outside Grand Junction, Colorado. When Brad entered the pink house, he could hear two people arguing in the room behind the check-in desk. Mr. and Mrs. Turner, he presumed. Brad rang the little bell, but they didn’t seem to hear him. For twenty minutes, Brad overheard their conversation. They both had differing opinions on how to manage the inn: spend their profit, clean the rooms, manage the gift shop, etc. Meanwhile, it seemed like Brad was the only guest. Eventually, Brad took matters into his own hands by going to “check-in” with them instead of the other way around.

“You both want the same thing,” Brad said to the couple, “You both want to be in charge, but that’s only possible if you are both willing to compromise.”

“Will you help us?” asked Mr. Turner, “We could use an impartial voice.”

“I will do my best,” Brad said, and for the next hour and a half he gave his advice when needed. This was way more exhausting than he had anticipated, and when he was finally shown up to his room, he was glad to be left in peace. In the morning, Brad flew away with a renewed sense of pride, for he was able to reunite a marriage.

Nina also said farewell to her hosts, and by mid-afternoon both the bear and the eagle reached “Lebanon, Kansas!”

“This is America’s center,” the bear and the eagle said, “This is its heart. Here you will become whole.” The eagle began its decent, and Brad could see Nina riding to greet them. Even from a distance, Brad felt like he could pick out every feature of her face, as if he had already studied it.

When Nina saw Brad’s smiling face looking down from the eagle, she felt exactly the same way. All the unsuccessful relationships no longer mattered. Brad and Nina had acquired the patience, humility, and forgiveness they needed to move forward with their lives…together.