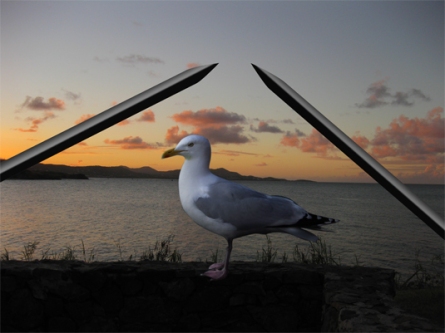 A man and a woman approached each other on a beach one breezy summers night. You could have cut the tension with a knife, or a sword in their case. They finally stood seven feet, cautious not to make any sudden movements.

“Think or hope?” the woman asked.

“Maybe a little of both” said the man.

“Don’t tell me you’re having second thoughts,” said the woman.

“They’re more like first thoughts,” said the man, “I’m not sure I really thought it through at all before now.”

“It’s just like fencing, only one of us dies in the end,” said the woman. “Don’t you want to give it your best shot? I mean, you drove all this way. You interrupted me during dinner. It took me five hours to make those tamales.”

“Oh, poor you, that must have taken a lot of time away from your nine cats.”

“I only have three cats.”

“Guess what?” said the man sarcastically. “It doesn’t make you any less lonely. You somehow managed to turn my revenge plot into a mercy killing?”

“So, you’re ready then?” asked the woman.

“More than ever.” said the man, lifting his sword in front of his face and then dipping it in respect. The woman did the same. Without hesitation, they left their positions and circled. The woman snarled, and was about to lunge, when she felt a glop of thick liquid fall on her head and slide down her face. The man and the woman simultaneously looked up in the air. A seagull flew high above them.

“I can’t fight you now. A bird just pooped on your head. That wouldn’t be fair.” said the man, but the woman just wiped her forehead on her sleeve, and resumed first position.

“Why are you pushing this?” asked the man, “I’m the one with the problem here,”

“I beg to differ,” said the woman, “You gave up on us first. I put on a few extra pounds, and you found me less attractive.”

“What does that have to do with anything,” said the woman.

“Mono can spread through kissing,” said the man.

“But I didn’t have mono,” said the woman, astonished, “Were you kissing someone else?” The woman was ready to lunge, when the bird pooped on the man’s head this time. She froze—and then burst into hysterical laughter.

“I guess that makes us even,” said the man as he ran to rinse out his hair in the ocean. The woman just kept laughing.

“Sort of,” said the woman as she laughed.

“You know you sound like a hyena,” the man said, “but you’re the only woman for me. I never kissed anyone else.” He threw his sword to the ground, and the woman did the same. They spent the whole night on the beach together; no distance between them. The seagull soared over their heads in a heart-shaped pattern before flying off to poop on other dueling couples.

One thought on “Do Seagulls Hold Grudges?”